"You have sat too long for any good you have been doing lately ... Depart, I say; and let us have done with you. In the name of God, go!" 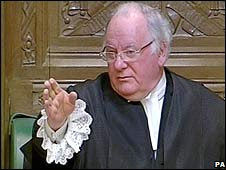 Could anyone fail to be disgruntled, disappointed, disillusioned, dismayed by the dismal, disingenuous disaster that is Michael Martin ? I watched with incredulity this inadequate man's sad statement yesterday. No apology. No acknowledgment of his own duty or his failure to perform it. In true New Labour style he tried to pass the buck to others, the Sergeant-at-Arms or the police. Note his use of the passive - "I was not told that the police did not have a warrant" and "I was not asked the question of whether consent should be given or whether a warrant should have been insisted on...". The passive voice is always favoured by people trying to escape their own responsibility. Is there a bank-robber, a fan of any television detective programme, indeed any citizen who does not know that the police need a warrant to search ? Why did it not occur to the Speaker (£76,904 p.a. on top of an MP's salary) or the Sergeant-at-Arms (salary unknown) to ask to see a warrant ? Can it be, as Dominic Grieve and Chris Huhne suggested on Newsnight that Parliament has now become the creature of the executive and can no longer defend itself ? Yet most MPs are still mealy-mouthed about the Speaker. Time now to stand up. MPs must remember the words of Oliver Cromwell and tell Michael Martin it's time to go.
Posted by David at 8:51 am