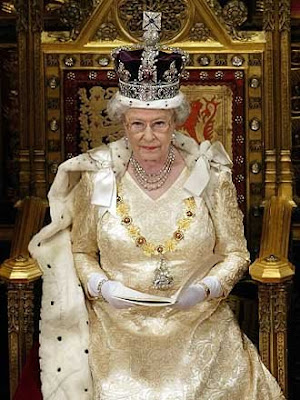 It occurs to me ( and many others) that trust in parliament cannot be rebuilt without a general election. One of the many appalling features of our uncodified constitution is the power of the Prime Minister to choose the date of a general election. Gordon is in no hurry. I consulted my ancient edition of de Smith's Constitutional and Administrative Law to see if the Queen could dissolve parliament without his advice. The last precedents were in 1783 and 1834 and may not be helpful. de Smith says:

"[The Queen]...would also, it is submitted, be justified in dismissing her Ministers if they were purporting to subvert the democratic basis of the constitution".

He gives the examples of extending the life of parliament, obtaining a majority by duress or fraudulent manipulation of the poll. As m'learned friends say, this case is not on all fours. Nor of course is parliament; it is prostrate.

de Smith goes on to point out the difficulties in the way of the monarch 's insisting on a dissolution.

"It is true that the Queen might urge upon the Prime Minister that a dissolution might be in the best interests of the country and he might reluctantly agree to advise her to dissolve. But if he did not agree, and the Queen were to insist on a dissolution then she would have to remove the Prime Minister and find a new one; the procedure upon a dissolution of Parliament entails the making of an Order in Council and the issue of a royal proclamation under the Great Seal, and this requires the cooperation of Ministers."

He concludes that if the Prime Minister's colleagues refused to choose a different leader, the Queen could call the Leader of the Opposition to be Prime Minister for the sole purpose of advising a dissolution, which David Cameron would undoubtedly do. The Queen would thus become embroiled in party politics, but she would have immense popular support for doing it.

Whatever the political consequences, surely an election is a necessary condition of the renewal of our political system.

P.S.
Since posting this, I have seen that Craig Murray has started a petition to the Queen to dissolve parliament. You can sign it here.