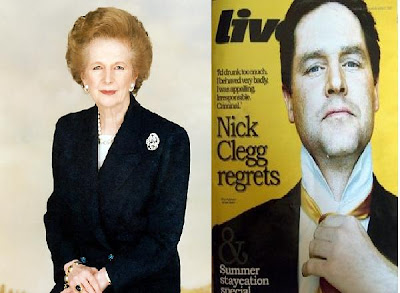 Bad news about Fraser Nelson’s interview with Nick Clegg in the Spectator Daniel Hannan and others have spun it to link Nick with Thatcher. In the interview Nick was claiming that Liberalism requires standing up to vested interests and that just as Thatcher stood up to the Trade Unions, so he will stand up to the banks. I can see that the comparison may have appeal to older Middle England Tory voters but of course it will be spun all over the place by hostile journalists in the mass media while few of the Spectator’s rather small readership will vote anything but Tory, so perhaps not the best strategy. Anyway I well remember Margaret Thatcher borrowing Liberal rhetoric on the economy but her government’s conduct of the economy was not genuinely Liberal as she only stood up to vested interests which opposed her and did nothing about those which supported her like the defence industry (notably BAe) and the brewers. I fear that Nick’s trying to sound tough again. As Liberator has often said, “Give people a choice between a real Tory and an imitation Tory and they will always chose the real one.” Much better to offer a real Liberal, which I believe Nick is.
Posted by David at 7:45 am