"One can survive everything, nowadays, except death." 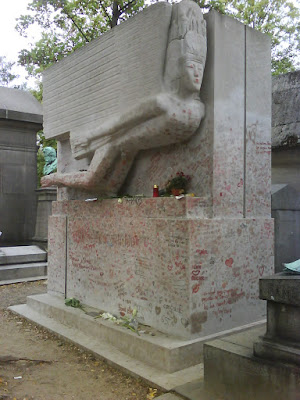 In Paris recently I visited Pere Lachaise cemetery. It is a vast necropolis with Oscar Wilde buried furthest from the entrance. This has not stopped a continuous flow of visitors since he was moved there in 1909 from his original resting place outside Paris. As you can see many of them pay their tributes in writing with marker pens or on post-it notes. Thus defacing the tomb does seem a strange way to honour someone you admire.

Wikipaedia tells me the tomb was commissioned by Robert Ross and designed by Sir Jacob Epstein, adding "The modernist angel depicted as a relief on the tomb was originally complete with male genitalia which have since been vandalised; their current whereabouts are unknown." Taken by a fan or a critic ? Who knows ? After my trek to Oscar, my feet hurt and I decided to leave Sartre, Jim Morrison et al to rest in peace.
Posted by David at 10:54 am