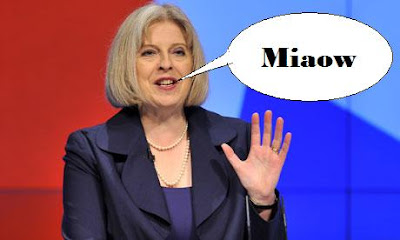 Claws were out at the Tory Conference as Teresa May and Ken Clarke clashed over the Home Secretary's claim that courts applying the ECHR's Article 8 on family life allowed an illegal immigrant to stay in the UK because he had a cat. May has now admitted that this was not true. The judge was ruling on the veracity of the man's relationship with his partner, which was partly evidenced by the joint purchase of a cat.

The Guardian report says "May's speech was not shown to Clarke. In common with conference speeches by all cabinet minsters, it was cleared with the "quad" committee of David Cameron, Nick Clegg, George Osborne and Danny Alexander.". Come on Nick and Danny ! Wake up and smell the Tories. Don't leave the defence of the ECHR to Ken Clarke alone.
Posted by David at 6:21 pm