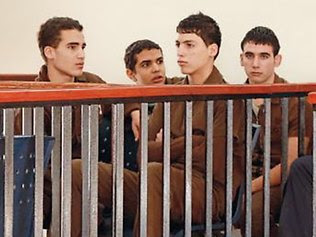 The Australian reports on the treatment of Palestinian children by Israeli soldiers and Israeli courts. This is a far cry from any system of justice we recognise. John Lyons, the reporter, was allowed to attend the court with an official Israeli guide but not allowed to photograph the Palestinian children walking in handcuffs and shackles.

An Australian lawyer, Gerard Horton, who defends Palestinian children, describes how arrests happen. "Once bound and blindfolded, the child will be led to a waiting military vehicle and in about one-third of cases will be thrown on the metal floor for transfer to an interrogation centre. Sometimes the children are kept on the floor face down with the soldiers putting their boots on the back of their necks, and the children are handcuffed, sometimes with plastic handcuffs which cut into their wrists. Many children arrive at the interrogation centres bruised and battered, sleep-deprived and scared."

Many Israeli groups are protesting about the treatment of these children, including soldiers who now regret the way the behaved, but the arrests and punishments continue. Justice and occupation do not go together.
Posted by David at 6:53 pm