Belgium - "a land that might almost have been dreamed" 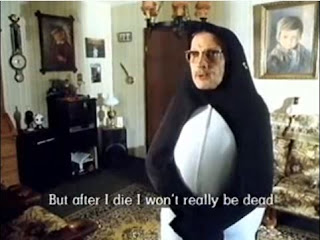 I spent a total of seven years of my life living in Belgium but I never met the man obsessed with penguins.  Tabloids like to use "Brussels" as shorthand for the EU, as if there was some bureaucratic cellar in the Grand Place dreaming up madder and madder regulations to impose on Britain.   Douglas Adams' take on Belgium was surprisingly unpopular when I played it to a Belgian friend.   Jonathan Meades' take does more justice to the country and its delightful oddness.  See volume 2 of 3 at  6m29s for the national sport of finch watching and 9m30s for the museum of underpants, but if you have time watch all three volumes. Penguin man is in volume 3.  It will lighten and illuminate your day.

I've excluded people born before Belgium became a nation (1830) such as Peter Paul Rubens and Simon Stevin (inventor of double entry bookkeeping).   If you want more, there is an excellent website on the theme called "Famous Belgians".   John Cleese doesn't seem to like them.

Email ThisBlogThis!Share to TwitterShare to FacebookShare to Pinterest
Labels: Belgium

Oh, come on. Why leave out Beethoven?

Apparently one of the questions on one of the papers for last year's examinations for the Fellowship at All Souls, Oxford was simply:

sappho, I know Van Beethoven sounds more Flemish than German and that there are Beethovens in the telephone directory for Mechelen but Ludwig was born in Bonn and Belgum didn't exist as a country at the time.