The making of EU Laws and sausages 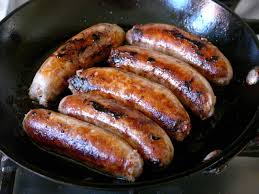 Helena Morrisey has written a very misleading and mistaken article in the Telegraph.  (Nothing unusual there, you might say, but it deserves rebuttal).  Ms Morrisey makes four criticisms of the EU legislative process and one massive mistake.  The criticisms are:
1) legislation on a large scale at a distance leads to bad outcomes;
2) EU Commissioners may be motivated by proving themselves right instead of finding the right solution;
3) An EU Commissioner misused polling evidence;
4) Industry has to spend a lot of effort lobbying to influence legislation.
Of course all these criticisms apply (sometimes more forcefully) to UK national legislation.  "Laws are like sausages. Better not to see them made", a quotation falsely attributed to Otto von Bismarck.

Scale and distance
By now, we should be familiar with the habit of British government of imposing very detailed one-size-fits-all regulation on the UK.   Jo Grimond used to remind us of the wartime rubrick that in the event of invasion people should report to the nearest railway station.  In the Orkneys this was Bergen in Norway and the locals reported back that unfortunately it was already in enemy hands.   Clearly the dangers of uniformity are even greater over the larger area covered by the EU, which is why the legislative process operates differently.  European Directives set out agreed objectives but leave the specific means of achieving them to national legislation which each member-state is required to adopt to transpose directives.  Imagine how beneficial it could be if UK legislation gave such flexibility to local government.

Motivation of EU Commissioners
Ms Morrisey's only evidence for all her criticisms is her own experience of draft legislation for gender quotas on company boards.   Like her, I don't agree with mandatory quotas, but the EU Commissioners have not proposed this to satisfy their amour propre.  Gender equality is a principle of the EU set out by all member-states in a number of treaties dating back to the Treaty of Rome and in the Charter of Fundamental Rights.  All these documents were agreed unanimously (as treaties must be) so we know that successive British governments have voluntarily signed up to them.  For more information, see here.  See also the Council of Ministers' conclusions on the European Pact for gender equality for the period 2011 - 2020.   A British minister attended that meeting and agreed those conclusions.   The Commission's job is to draft legislation to give effect to the agreements reached by member-states.

Polling evidence
What, a politician misquoting polling evidence ?  Surely that would never happen in Britain, would it ?!!!!  However, Ms Morrissey says "The crux of ...[the Commissioner's]... argument was that “three-quarters of Europeans are in favour of legislation on gender-balanced company boards”.   No it wasn't,  the crux was the whole agreed programme on gender equality; the misquoted polling was an argument prayed in aid of the idea.

Lobbying by industry
Morrisey simultaneously claims that all this lobbying is a waste of effort and that the EU is an "undemocratic political union", a calumny for which no evidence is produced.  In fact, the ability of industry (and anyone else) to influence legislation is a fundamental component of democracy.  Far from being undemocratic, the EU has a very open legislative process compared the archaic rituals of our own parliament, dominated by an overmighty executive.

One massive mistake
Morrisey asserts "The power of the European Commission is such that it is relatively easy for it to create new regulations...", again without evidence.   She goes on to complain about the qualified majority voting system which she describes as a debilitating process.  She completely omits to mention that QMV is the system in the Council of Ministers.  The Commission only proposes legislation which then has to be agreed by QMV in the Council and, in nearly all cases, by a majority of the European Parliament.   Yes, I'm sorry Ms Morrisey, but democracy does take time and effort unlike most decisions made hierarchically by managers in industry.  Would she prefer a system where an EU Commissioner really had the power and could ignore lobbying ?
Posted by David at 8:56 am