His sins were Scarlett but his dossier was read and believed 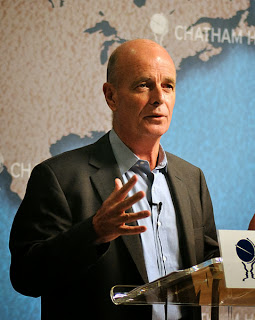 Writing in today's Guardian Simon Jenkins says "The days of believing spy chiefs who say 'Trust us' are over."   Sorry Simon, those days were over more than a decade ago when Sir John Scarlett colluded with Blair's No.10 in compiling the dodgy dossier.  Or perhaps in 1924 when MI5 and/or MI6 leaked the fake Zinoviev letter to the Daily Mail and brought down the Labour government.

In case you have any doubts about Scarlett's culpability, we have his memo to No.10 at the time in which he refers to "the benefit of obscuring the fact that in terms of WMD Iraq is not that exceptional".  Scarlett later claimed at the Iraq Inquiry that he had not been under pressure to change the dossier and that it was produced in good faith.    Even the weak-kneed Hutton Inquiry concluded "that Scarlett had worked closely with Alastair Campbell, then the Prime Minister's Director of Communications and Strategy, on the controversial September Dossier, with Campbell making drafting suggestions which the inquiry found may have "subconsciously influenced" Scarlett and the JIC. This influence may have had deleterious effects on the quality of the assessments presented in the dossier."

But what does Sir John Mcleod Scarlett care ?  In 2004 he became head of SIS and in 2007 he got his KCMG.  No, Simon Jenkins, the days of trusting spy chiefs are long over.

(Footnote: it was Norman Baker who forced an investigation into the Zinoviev letter as well as accusing the security service of complicity in the death of Dr Kelly following his criticism of the dodgy dossier.)