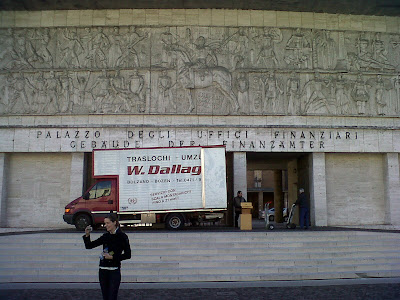 This fascist frieze on the public finance office in Bolzano/Bozen has played a recent role in keeping Silvio Berlosconi in office. The embattled Italian PM needed every vote to survive a no confidence vote. The frieze displaying Mussolini's achievements in Roman style and carrying the slogan, "Believe, obey, fight" is offensive to the German speakers of the Sud Tirol and they want it removed, whereas Italian speakers want to keep it. Berlusconi bought the votes of local MPs by offering to arrange a compromise - covering it up. Covering up would appear to be his special skill, except where young female vistors are concerned.
Posted by David at 6:31 am

I thought UNcovering them was his special skill...