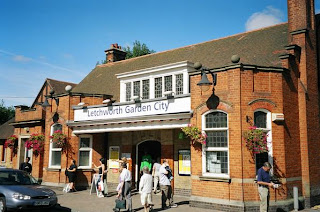 Last week, I found myself at Letchworth station in the rain.  Today I found George Orwell's comments on Letchworth and socialism:

"The first thing that must strike any outside observer is that Socialism in its developed form is a theory confined entirely to the middle classes. The typical Socialist is not, as tremulous old ladies imagine, a ferocious-looking working man with greasy overalls and a raucous voice. he is either a youthful snob-Bolshevik who in five years' time will quite probably have made a wealth marriage and been converted to Roman Catholicism; or, still more typically, a prim little man with a white-collar job, usually a secret teetotaler and often with vegetarian leanings, with a history of Non-conformity behind him, and above all, with a social position which he has not intention of forfeiting.
This last type is surprisingly common in Socialist parties of every shade; it has perhaps been taken over en bloc from the old Liberal Party, in addition to this there is the horrible-the really disquieting-prevalence of cranks wherever socialists are gathered together. One sometimes gets the impression that the mere words "Socialism" and "Communism" draw towards them with magnetic force every fruit-juice drinker, nudist, sandal-wearer, sex-maniac, Quaker, "nature Cure" quack, pacifist and feminist in England
One day this summer I was riding through Letchworth when the bus stopped and two dreadful-looking old men got on to it. They were both about sixty, both very short, pink, and chubby, and both hatless. One of them was obscenely bald, the other had a long grey hair bobbed in the Lloyd George style. They were dressed in pistachio-coloured shirts and khaki shorts into which their huge bottoms were crammed so tightly that you could study every dimple. Their appearance created a mild stir of horror on top of the bus.
The man next to me, a commercial traveler I should say, glanced at me, at them, and back again at me, and murmured "Socialists," as who should say "Red Indians." He was probably right-the I.L.P. were holding their summer school at Letchworth. But the point is that to him, as an ordinary man, a crank meant a Socialist and a Socialist meant a crank."