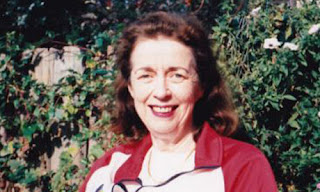 Many Liberals will have been saddened to hear of the death of Hester Smallbone.   Her daughter Teresa wrote an obituary in Saturday's Guardian.   Hester was a stalwart of Richmond Liberals and I lodged with her in Kew in 1983 so that I could take part in the general election campaign which Alan Watson very nearly won.   She was larger than life, generous, vocal and enthusiastic.  Indeed, Hester's enthusiasm for liberalism was unbounded.   I remember we travelled through Richmond on an open-topped battlebus with Hester dressed in orange from head to foot.   She may sometimes have overestimated the party's impact.  Returning from a Liberal Conference in Blackpool, I met Hester at a  motorway service station.  When I commented on the amount of traffic, she told me it was all the Liberal delegates on their way home.    When her daughter voted Labour, she commented, "Born free, chose slavery".
Posted by David at 9:44 am