Opik: Sad when the lust for publicity turns to masochism 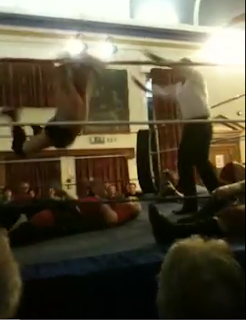 This is when a great weight landed on Lembit Opik and broke his ribs, two minutes after he entered the wrestling ring in Welshpool.  Lembit's poor judgement and lust for publicity, which cost him his seat in Montgomeryshire, continue to dog his life.   After the match, he commented, "I think I need to think about what I am doing in future, because I think I may have gone a step too far this time."     As a child of ten might say, "Well duh ! You think so ?"  Perhaps if Lembit had learned that lesson long ago, Montgomeryshire would still have a Liberal MP.


I am not a fight fan and I do wonder about people who enjoy this spectacle.  After Lembit's opponent, Kade Callous, threw him on the floor he stood looking on while the crowd urged him to do more, which he did as the picture shows.  In the video you can hear the mob cheering and one man shouting "Stomp him !" repeatedly, after he had been stomped already.   According to the Shropshire Star, one fan commented "It was the best show we have seen in Welshpool in my 35 years.”.   A fight that lasts two minutes between grotesquely unequal opponents is "the best show" ?????   Clearly life in Welshpool could be better.