Shame on the Anglican laity ! 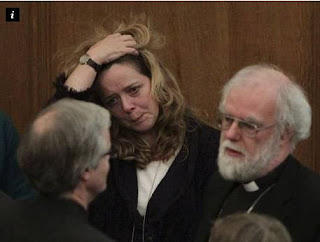 As a devout atheist, I share the sorrow of my Anglican friends at this ridiculous decision and  as a devout Liberal, I believe it's time to look at disestablishment again.   If the CofE wants exemption from equality legislation, then it should join the other churches without the privilege of being the state's church.

The media keep reporting that the synod had voted against women bishops.   This is a simplification to say the least.   The church has a very odd constitution, requiring a two-thirds majority in each of the three houses, which voted today on the question of women bishops as follows:

In other word a blocking minority of 74.   If only 4 members of the laity had voted the other way, the measure would have been passed.   If the combined backwoodsmen (and sadly women) of the laity have any regard for the hobbled majority, they should return tomorrow, vote again (which can be done with certain permissions) and eight of them should abstain, producing 132 for and 66 against, which provides 2/3 of those present and voting exactly, as required by Article 8 (1C) of the Constitution of the General Synod.

If you think think this is odd, have a look at how the membership of the synod is chosen.   The University of Cambridge elects one of the clergymen.   Don't ask me how that the university chooses that person.  I didn't have a vote.

Here endeth the lesson.
Posted by David at 10:08 pm