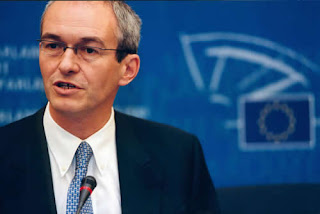 To Europe House last night for the launch of Surrey University's Centre for Research on the European Matrix (CRonEM) where my old friend Richard Corbett (now designated the 4th most influential Brit in the EU) and Sir Stephen Wall debated "Is the European Union past its sell-by date ?".

Richard emphasised a point he has also been making on the Today programme, that the UK should engage in the debate about the content of the EU budget not just the level.   Has any British paper or radio or TV programme reported that the European Commission's proposal involves cutting the CAP budget by 20% in real terms over 5 years and switching funds into activities that would benefit our economy like the research budget ?

Incidentally, EurActiv's list of top Brits in the EU has a Liberal Democrat at no.1 and three others in the top 20.   You can check whether you guessed right here.
Posted by David at 8:43 am