He's not the messiah, he's a very naughty boy ! 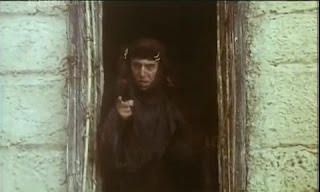 I was living in Brussels in 1979 but had the odd experience when visiting Britain of seeing only two television shows, of which one was a parody of the other.    On 9th November I went to the early evening performance of Monty Python's Life of Brian.  As we left the cinema, I noticed Malcolm Muggeridge and Mervyn Stockwood, the Bishop of Southwark going in.   Funny, I thought.  Funny, not their sort of film.  Later that night we tuned into the BBC's review programme  Friday Night, Saturday Morning, in which Muggeridge and Stockwood laid into the film, which was ably defended by John Cleese and Michael Palin.
Eleven days later, back in Britain again, I watched Not the Nine O'Clock News with a sketch in which a Python-worshipping Alexander Walker (film critic played by Mel Smith) laid into the fictional General Synod's Life of Christ.   This would have made no sense if I hadn't seen the original debate.

I'm delighted to find that both programmes are available on YouTube,  the Life of Brian discussion here and the parody here.   I thought Muggeridge and Stockwood were pretty awful when I saw the show 33 years ago but their bigotry and contempt looks even worse today.   I admit I had been shocked by the crucifixion scene myself but the Christian girl I was with had not been at all upset by it.  What does strike me now is the length of time the review programme was prepared to devote to one subject, impossible in the impatient, ratings-driven world of modern TV.

Wikipedia has a fascinating article on Life of Brian and the Christian reaction.   Apparently Muggeridge and Stockwood claimed not to have seen the opening sequence which makes clear that Brian is not Christ.  If they did claim that, I have to wonder what they were doing between the moment I saw them and the start of the film.  The article reveals a cameo role played by a famous British comedian who happened to be visiting Tunisia at the time of filming.  Can you guess before you look it up ?

Email ThisBlogThis!Share to TwitterShare to FacebookShare to Pinterest
Labels: Bishop of Southwark, Life of Brian, Muggeridge, Not the Nine O'Clock News, Stockwood

Bull's eye. I owe you a drink. Try the quotation in the next post.