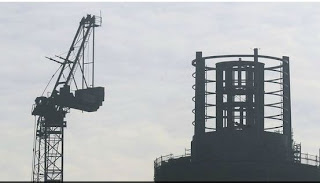 Crane driver Mr Biagioni says he escaped death from the helicopter crash at Vauxhall because he was late for work.  The site developers gave a different version:


Tony Pidgley, chairman of site developer Berkeley, said the crane driver was not in the crane because of the "fog level".
"The operative is just not allowed up that crane in conditions like that because you just can't see,"
I believe the crane driver.
Posted by David at 11:32 am