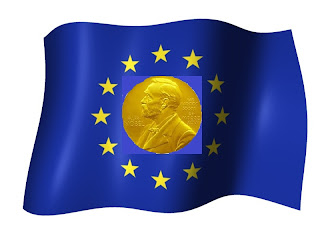 I have spent a lot of time today arguing on-line with fellow Liberal Democrats about the contribution of the European Union to peace.   Some have repeated the false but successful UKIP propaganda that the EU is undemocratic; some have challenged its contribution to peace; some have moaned about the Common Fisheries Policy.

As Romano Prodi pointed out on Radio 4  Europe has enjoyed the longest period of peace since the Roman Empire.   I fear the UK is now heading for an in/out referendum.  The entire British political class, not excluding the Liberal Democrats, will be to blame if the  vote is for out, after decades when they have failed to proclaim the achievements of the European Union or even engage in trying to improve it, preferring instead to carp on about fish and bananas.
Posted by David at 10:02 pm