Why are Labour such unprincipled, reckless bastards ? 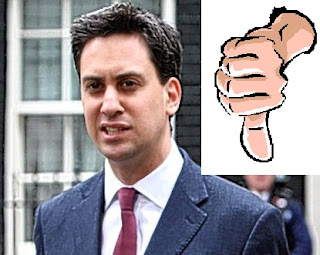 Not content with wrecking electoral reform and democratising the House of Lords, Labour now plans to reduce the EU budget.    Is Ed Miliband even capable of thinking beyond the next Commons vote ?  Today they plan to vote with Tory rebels to support the aptly named Reckless Amendment to cut the EU budget, not because as a party they want to undermine Britain's position in the EU even further but because they have a chance of defeating the government.   Even Tory eurosceptic Andrea Leadsom can see that the amendment is wrong.  When the inevitable referendum on EU membership comes, Labour may rediscover the virtues of being in the EU but it may be too late.  Labour will have done its bit to feed the widespread scepticism about Europe.    If their opportunistic games help them to get elected again, they may find themselves presiding over Britain's withdrawal from the EU and the disastrous economic consequences, not to mention the political ones - isolation in world affairs or worse, further dependence upon the United States as it too declines.

Not entirely surprising from people who were at the centre of the Blair and Brown governments!

David , I have just discovered your blog and much enjoyed reading it. I agree with you entirely about the silly vote on the EU budget by the purple gang.
Changing the subject, one way we Lib dems really can differentiate ourselves frrom the purples is by putin gforward a radicle defence policy, which I believe chould be completely non-nuclear. This may be a step too far fro some of our fellow Lib Dems (sadly) but i and Gareth Epps have been dkiscussing the advantages of bringing Lib Dems together for a Defence Summit away from Conference time (probably during late May 2013). One suggested venue is Reading (cheaper than London and close to AWE). We want to bring all shades of Lib Dem opinion together rather than just those who think as we do that the world would be safer without nuclear weapins although it is likely that it would attract our fellow travellers rather than those , who just want the whole subject to go away. Would you consider joining us to plan such an event,please? Janet King