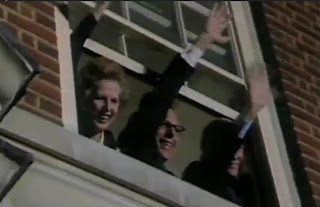 (Margaret Thatcher waving from Central Office after winning the 1983 election.  The building is now Europe House, HQ of the European Parliament in London. Ha !)

Never since the death of Princess Diana has so much been said and written in 24 hours about one dead person.  Some of the eulogies had me reaching for the sick bag, but nor could I join those who are tempted to echo Thatcher's own words, "Just rejoice, rejoice !".  I did rejoice greatly when she lost power but the death of someone who once held power years ago does not provoke gaudeamus igitur.

I will not add to the litany of praise and blame but this story will suffice. One day in the early '90s I was walking in the Cuillins with Lord Bonkers and my son Charlie.   As we returned to Glen Brittle we were overtaken by a thin, elderly, bearded man.  As we removed our walking boots at the car we could see him becoming very agitated in the telephone box. (The Glen Brittle telephone box was a vital resource.   You were advised to ring a friend before setting out and ring again on returning.   If you failed to call the second time, your friend could alert the mountain rescue.)  The professor (it turned out that he really was) emerged from the box and we asked him what was the matter.    He told us the telephone didn't work and his mother (God knows how old she was) would be getting at the gin as he was late in calling.   "I teach nuclear physics but I can't make the phone work", he expostulated.  He had managed to get through to an operator to complain.  The operator wouldn't put his call through, told him it wasn't a BT telephone but refused to divulge which company did operate the box.   (We're getting there. Bear with).   At this point, he drew his conclusion, "Margaret Thatcher ruined this country", then he drew breath and added "Mind you, I'm not a socialist".   He was of course one of us, invigorated by mountain air, exasperated by failing technology, a Liberal expressing the outrage that we all feel in our hearts.
Posted by David at 10:21 am