Blaming the poor - whatever happened to solidarity ? 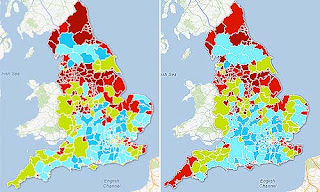 The Guardian today reveals that even Labour supporters have bought into the Osbornite vision of the undeserving poor.   "Labour party supporters increasingly believe that welfare recipients are undeserving and that the welfare state encourages dependence, with a noticeable share saying that poverty is caused by a personal failing rather than a problem with society."  This is the conclusion of a study by the Joseph Rowntree Foundation.

The maps above come from a different report last year showing where the greatest risks of poverty according to Experian.  Leaving aside Experian's total inaccuracy about my own affairs, I suspect there is a strong correlation between the riskier areas and the areas with the highest Labour votes.  We know that Tories and UKIP blame the poor but where is our society headed if Labour voters join in ?

The Rowntree website has a lot of material on poverty but I couldn't find the actual report so I don't know about the attitudes of Liberal Democrat voters.  The party's membership cards quote the preamble to the constitution: "The Liberal Democrats exist to build and safeguard a fair, free and open society, in which we seek to balance the fundamental values of liberty, equality and community, and in which no one shall be enslaved by poverty, ignorance or conformity."   Much debate goes on about the relative merits of liberty and equality but a better phrase uttered on the radio by David Goodhart has stayed with me: "The twin aims of Liberalism - solidarity and diversity".
Posted by David at 9:22 am No comments:

Today on Facebook a friend posted an article by Vince Cable saying that Liberal Democrats would table an amendment in the debate on the humble address (response to Queen's Speech) calling for a referendum on British membership of the EU. Only problem: the article was from 2007.

It was the wrong idea in 2007 and it's even more the wrong idea today, but not just because we would lose the referendum today.  Misunderstanding about the EU is deeper than it ever was and not by accident.  The media have been feeding the public lies and distortions about the EU for several decades. Many politicians from all parties have compounded the problem by repeating the casual xenophobia on which it is all based.      But the whole idea of a referendum is wrong.

A referendum is the worst possible way to decide complex issues. Why ?

1. People rarely vote on the merits of the actual issue, but on clusters of related and unrelated matters.  Classic example: the referendum on AV.   Polls show and have shown for years widespread support for electoral reform but people voted on their opinion of the Liberal Democrats at the time.

2. When an issue is complex, if people vote on the issue at all, they vote on the basis of media representations of the issue, which are often far from accurate and usually biased.  In this case, a tiny minority (both for and against British membership) would read the actual treaties.  The vast majority will have read and heard over and over again the myths propagated by the media. Before you respond that I am being elitist, I am not saying that people are incapable of understanding the issues.  In frequent discussions face to face I am convinced that most people can understand the issues.  I AM saying that they won't because they won't have a face-to-face discussion.  Instead they will face the continued bombardment of deliberate distortion in the media.

Europhobes (they are not sceptics, not doubtful or critical - they want out) will argue that the issue of in-or-out is not complex in itself.  Everyone can understand it.   If the Scots can decide whether they want to be an independent country, so can the UK.   Totally different question.  Scottish Nationalists are actually less nationalist than the British europhobes.  They want Scotland to be a country within the European Union, a supranational body.  Europhobes by contrast peddle the myth of national sovereignty, that Britain should and could have the power to decide all questions independently.   A moment's reflection on the global economy, the environment and security shows this to be impossible.  They constantly paint supporters of the EU as wanting to "create a country called Europe", another lie.   The EU is about different countries working together.

If anyone persists in arguing the merits of referendums, do they then think that the question of whether British soldiers should fight, kill and die abroad would be a suitable subject to put to referendum.  The public has never been asked to vote on the North Atlantic Treaty nor on the fundamental change a few years ago when NATO decided that mutual defence included fighting out-of-area.    Perhaps questions rather more important than anything for which the EU has competence ?
Posted by David at 9:56 am No comments: 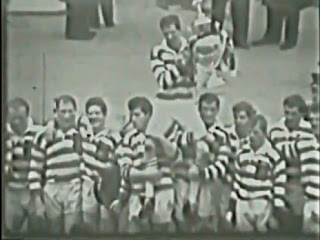 For a few words from the man who introduced Wigan to the world - Eddie Waring - on another good day for the town in 1965, see here.
Posted by David at 7:24 pm No comments:

Email ThisBlogThis!Share to TwitterShare to FacebookShare to Pinterest
Labels: Wigan 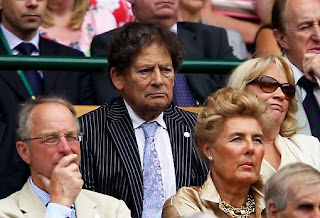 Excellent New Statesman comment on Lawson's outburst.  "Lawson's piece is a reminder of why the EU referendum has the potential to result in the biggest Conservative split since the reform of the Corn Laws. "  Now that's a day we can all look forward to.
Posted by David at 7:58 am No comments:

Robin Cook resigned. 396 warmongers should have. 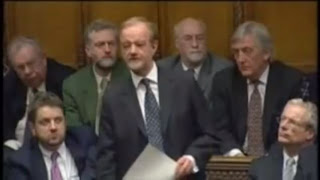 Whilst looking for something else I came upon Robin Cook's resignation speech on You Tube.  I remember listening to it at the time.  It still moves me to tears and anger at Tony Blair and his fellow war criminals on the Labour front bench.   At the end of the clip when the house claps, you can see their embarrassed immobility, except for John Prescott who shifts his great weight uncomfortably.  Cook  was a better man than any of you.   I for one will not forget how Labour and Tories took us to war on false pretences.  Tories need not pretend that Blair deceived them.  He didn't deceive Cook and he didn't deceive me and he didn't deceive the millions who marched against his shameful war.

You can find Cook's speech here and the Iraq debate here.  It is a peculiarity of Hansard that whilst the record contains the full text of Tony Blair's motion for war, it does not appear to contain the text of the amendment opposing war without UNSC consent.  The amendment was lost 396 to 217.  You may read here the list of MPs who voted NO to the amendment and therefore yes to war.  Never let them forget it.
Posted by David at 12:01 am No comments: 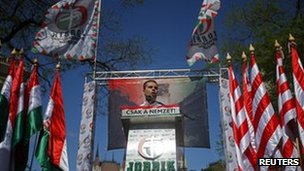 This is Gabor Vona, the chairman of the Hungarian party Jobbik, addressing his fellow racists.   This  weekend hundreds of them protested in Budapest against the city's hosting of the World Jewish Congress.  Nor is this a minor party.  It is Hungary's third largest with 43 MPs and 3 MEPs.  The old Hungarian Liberal party,  the Alliance of Free Democrats (Szabad Demokraták Szövetsége) has almost disappeared but there is hope in a new group, Together 2014 (Együtt 2014), four of whose members came to help us in the Cambridgeshire County Council elections.

The rise of right-wing populist parties such as UKIP in UK, Golden Dawn in Greece and the Five Star Movement in Italy is characteristic of European austerity.  In hard times people reject traditional parties and gravitate to those offering nationalism, quick fixes, hatred and fear of others.  Traditional parties meanwhile fail to present their core beliefs effectively for fear of losing votes to each other, thereby guaranteeing that they do lose votes because nobody knows what they stand for.   This disastrous mixture of failure and demagoguery feeds of economic distress.