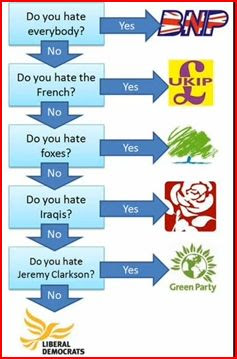 The picture shows a guide to voting on the basis not of what you like or value but of whom you hate. Historians maintain that nobody really felt English until the Hundred Years' War against France. I have seen a set of football scarves and hats which proclaim "Love Team A, Hate Team B". You can fill in A or B yourselves - I hate all soccer and would rather listen to Colin Rosenstiel explaining STV...well maybe not. Which would be harder to sleep through ?

Can we only establish our identity in distinction from other people's - not just distinction, but contempt, loathing and even violence ? I do hope not. I am indubitably and proudly British, I never miss the Last Night of the Proms, but I do wish the Census Form had allowed me to describe myself as more than one thing - British and European would have done for me.

P.S. (OK,I know there's no signature)I don't hate the Labour Party but if I have to listen or watch Caroline Flint sneering again, I might begin to. As for the Tories, when seeking selection I was asked if I hated them and I replied that we should follow the advice of the Church of England: Hate the sin and love the sinner !
Posted by David at 10:09 am