Liberals in literature and films (13)

I am very grateful to Malcolm Baines for the following information. 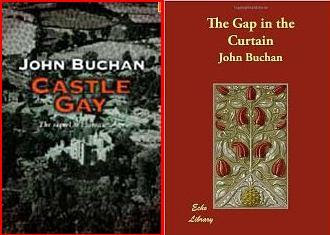 "Despite being a Tory MP from 1927 to 1935, Buchan has sympathetic portraits of Liberals in quite a few of his books and short stories. In "Castle Gay" for example, published in 1930, there is a thinly disguised Lloyd George renamed as Foss Jones. In "The Gap in the Curtain" from 1932, the 5 major characters are all able to look a year ahead to the then copy of "The Times". Whilst two of them see their own obituaries, another, a leading Labour politician, sees that the leader of the small Liberal Party has become PM. He spends the next year working out how this could happen and getting it spectacularly wrong, leading in the process to the ruin of his own political career. The Liberal leader combines some of the characteristics of Gladstone, Grey and Campbell-Bannerman - not always the most appealing ones!"
Posted by David at 9:51 am