Hannay was in Galloway 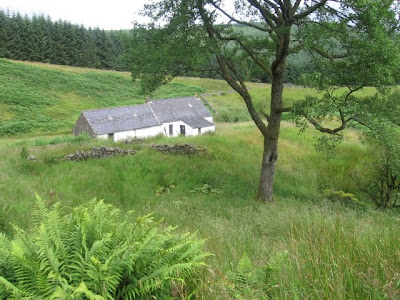 Iain Brodie Brown has pointed out that Hannay was in Galloway, not the Highlands. I've checked the chapter called "The adventure of the radical candidate". The meeting was in a town called Brattleburn, described as "an infernal Tory stronghold". It doesn't appear to be on the map but there is a Brattleburn bothy just North-West of Moffat pictured above.
Posted by David at 12:07 am

It seems we may both be right-the Dumfries and Galloway Tourist Board certainly claim the book is set in their region but Hitchcock relocated it to the Highland:
http://www.visitdumfriesandgalloway.co.uk/moviemap/the39steps/

as the 'further information' explains