How the British media lies about Europe 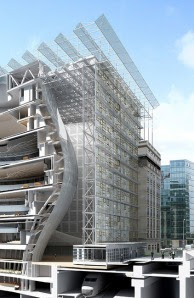 Richard Corbett has posted about British press and BBC coverage of a newish building in Brussels. It's a small story but symptomatic of the distortions of our xenophobic media.

While I'm here, may I also pour some cold water on the Eurosceptics' glee at Greece's problems, which of course they blame on the Euro. Greece's problems are endemic and caused by overspending and inefficient tax-gathering. Without the Euro they would have been thrown into the arms of the IMF much earlier. Oh, and by the way, this is not the end of the Euro, it is not even the beginning of the end, it is merely the end of the beginning.
Posted by David at 9:20 am

Interesting insight about the facts on the Europa building. The eurosceptics will of course always look for something to portray as bad news.
The challenge is more how we respond to those news items. I think we tend to "whinge" on pro-Europe blogs.
Could we (should we?) have a letter writing campaign to the newspaper concerned?
The same might usefully apply to the covering comment about the Greek debt crisis