The Old Inn at Stein, Isle of Skye 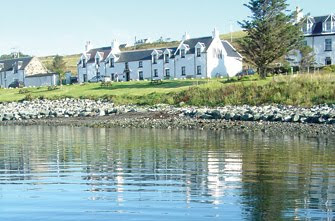 Craig Murray's current visit to Doune reminds me of my own visit to the Old Inn at Stein. We were having dinner when an American tourist came in and demanded coffee. The busy waitress said she was sorry but they were in the middle of serving dinner. The American expecting instant gratification of his wishes came straight back with, "Don't you serve after-dinner coffee ?". The waitress now flustered as well as busy replied, "Ye..es but you haven't had dinner.". The American expostulated and left in a huff. What the girl had meant was that she would be serving coffee later but right then she was busy serving main courses. A few minutes later, the chef appeared from the kitchen, shock of red hair, large straggly red beard and (I may have imagined this) a meat cleaver in his hand. "Look", he said, waving the cleaver "We'd like to serve him coffee. We would, but there's nae but the two of us here. If he comes back later we'll give him a coffee.". Of course, he did come back later (there's nowhere else in Stein) and the landlord bought him a drink and he bought the landlord a drink and they ended up singing in the ceilidh together.

I liked that the chef (almost certainly a merchant seaman on leave) cared that the customers should not think the place unwelcoming and that the American learned that Skye is not Times Square and is indeed a lot friendlier.

The landlord led off the singing with "I'm a man you don't meet every day". This turned out to be true. A year later I visited the Old Inn and asked after him. "Oh, the police came up from England and took him back" they told me. I won't name the Liberal Democrat MP who quarreled with the same man and had to sleep in his car.
Posted by David at 10:44 am