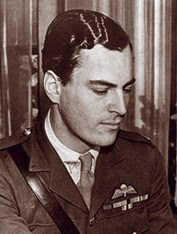 I was talking about this man only last week, not really sure if he was still alive and now he has died. In March 2009 the BBC4 showed an episode of the series Traveller's Century sadly not available now. A journalist followed Leigh Fermor's 1930s journey across Europe but also told the story of his wartime adventures and finally interviewed him. The most extraordinary part of the programme was an excerpt from Greek television's version of "This is your life" in which Leigh Fermor met not only his old Cretan resistance friends but also the German general they kidnapped. The story was immortalised in Stanley Moss's book and the Powell and Pressburger film Ill met by moonlight. The Independent Review of the programme is interesting.
Posted by David at 9:49 am

Anyone particularly interested in PLF, there's a whole blog devoted to him here: http://patrickleighfermor.wordpress.com/2010/05/26/obituary-john-smith-hughes-who-served-in-crete-with-soe/