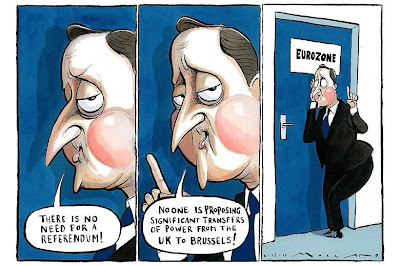 I joined the Liberals in 1974 for the party's views on the three Es: Economy, Environment and Europe. Now we are in government, we have abandoned our traditional economic ideas, most notably what Keynes taught the world. We have weakened our commitment to the welfare state bequeathed us by another great Liberal, Beveridge. We have compromised our environmental policies, particularly on nuclear power. Now we have condoned the nationalist myopia of Cameron and his party and isolated Britain in Europe. Of course I recognise how little 57 MPs can achieve but for all the good we might have done in government, I am now forced to the view of those friends and colleagues who argued that we should have negotiated a supply and confidence agreement and refused Cameron's faustian pact. We should have taken a long spoon to the coalition negotiations. Instead we took David Laws' knife, now held in Danny Alexander's trembling hand.

I regret my vote for the coalition agreement and I repeat in full Browning's poem from which I quoted at the time.

The Lost Leader
Just for a handful of silver he left us,
Just for a ribbon[4] to stick in his coat—
Found the one gift of which fortune bereft us,
Lost all the others she lets us devote;
They, with the gold to give, doled him out silver,
So much was theirs who so little allowed:
How all our copper had gone for his service!
Rags—were they purple, his heart had been proud!
We that had loved him so, followed him, honoured him,
Lived in his mild and magnificent eye,
Learned his great language, caught his clear accents,
Made him our pattern to live and to die!
Shakespeare was of us, Milton was for us,
Burns, Shelley, were with us,—they watch from their graves!
He alone breaks from the van and the freemen,
He alone sinks to the rear and the slaves!
We shall march prospering,—not thro’ his presence;
Songs may inspirit us,—not from his lyre;
Deeds will be done,—while he boasts his quiescence,
Still bidding crouch whom the rest bade aspire:
Blot out his name, then, record one lost soul more,
One task more declined, one more footpath untrod,
One more devils’-triumph[5] and sorrow for angels,
One wrong more to man, one more insult to God!
Life’s night begins: let him never come back to us!
There would be doubt, hesitation, and pain,
Forced praise on our part—the glimmer of twilight,
Never glad confident morning again!
Best fight on well, for we taught him—strike gallantly,
Menace our heart ere we master his own;[6]
Then let him receive the new knowledge and wait us,
Pardoned in heaven, the first by the throne!
Posted by David at 10:28 am

He is most associated with the phrase 'anti-cyclical deficit spending'.

Does this mean he supports continuing spending when a deficit is no longer
cyclical and becomes structural?

My feeling is that Keynes himself would accept there are limits to the
application of his policy, just as there must be limits to liberalism.