Pegasus Bridge and the battle for Europe 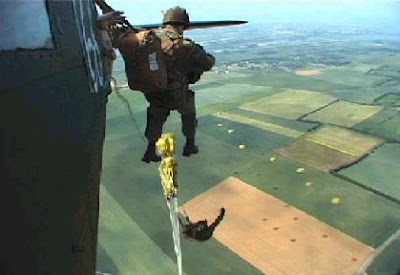 For the good of my blood pressure I have missed most of Question Time and instead watched Yesterday's account of the battle for Normandy, in which hundreds of thousands died over three months. Early in the programme we saw soldiers passing a sign to Ouistreham. I was reminded of my trip to Pegasus Bridge in June 2004, the sixtieth anniversary of D-Day. I hired a bicycle in Ouistreham and as I cycled up the canal path to Benouville I watched a commemorative parachute jump. There's a film of it here. All the hotels were full and I had taken a tent with me. Breakfasting on the campsite the next morning I met one of the paras. Out of the blue he asked me, "Are you in favour of European integration ?". "Yes", I told him, "I don't believe that the men who died here sixty years ago died so Europeans could spend the future the way we spent the past, killing each other in wars every few years.". He agreed wholeheartedly.

The European Union was founded by people who had seen years of murderous destruction. I am sickened when I hear eurosceptics bleating about the cost of the European Union, which is nothing compared with the cost of warfare even if you ignore the human cost. I am exasperated when I hear eurosceptics parroting the words "sovereignty" and "repatriation of powers" and condemning the EU as undemocratic. What does sovereignty mean in the face of global financial markets and global environmental crisis ? What is undemocratic about an elected European Parliament and a Council of national ministers responsible to national parliaments ? Do they imagine that Wall Street and its British counterparts are democratic or even accountable to anyone but themselves ?
Posted by David at 11:09 pm