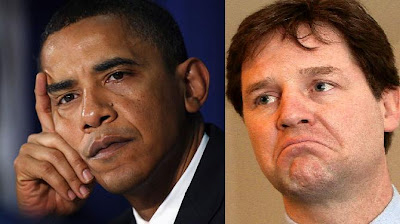 A kind friend has given me a subscription to the London Review of Books. The first edition to arrive by post includes a review by Jackson Lears of new biographies of Barak Obama's parents. The article (which is free on-line) has finally persuaded me that Kaps Komireddi may be right in at least some of his criticisms of Obama. Lears asserts that Obama has "retreated into politics as usual" and scorns his "deference to established power". He rightly identifies the defences of Obama to which his apologists including myself have resorted: "the regimented hostility of his opponents fuelled by racially charged resentment..." and that "...he really believes in the banalities of bipartisanship."

Lears' description echoes some of my thoughts about Nick Clegg. Both Clegg and Obama have multicultural backgrounds, both fervently seek to work across party lines, both attempt to maintain family life in the midst of the social demands of the nomenclatura, both have met with overwhelming hostility and both have disappointed their followers. I doubt neither the courage nor sincerity of either man but their fundamental decency seems ill adapted to the maelstrom of power and their cool rationality to the operation of its slippery levers.
Posted by David at 11:43 am