Nick Clegg - be yourself ! (An open letter) 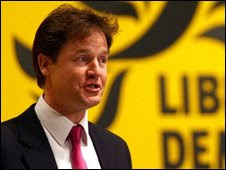 Your interview this morning on the Today Programme was disappointing. OK, James Naughtie, in the worst tradition of Today, interrupted almost every answer before you had completed one sentence. But, Nick, you know that's going to happen.

I nominated you for leader. I defend you against your detractors. I think you are a gut Liberal. But since you became leader, you have often appeared to be the prisoner of your advisors. They pull you back, they hold you in, they make you keep your guard up when you should be throwing a punch. Your message on the economy this morning was "Responsibility and Radicalism". You sounded responsible except that Naughtie had to take you through the figures three times. It made you sound like you were trying to hide something. You did NOT sound radical.

We can't convince the electorate that we are different by naked assertion of difference. We have to be different and unafraid to be different. We also need to be brief. Liberal positions are usually realistic and therefore nuanced. It's hard to condense these into soundbites but the media demands it. The disillusioned public won't wait for the end of a long sentence - it's just another politician covering his arse. We have good policies but people don't know them and they will be lost in the noise of battle unless they ring true and clear.

The economy - Labservatives would make the poorest people pay for the blunders of the richest. We won't. You made the points about fair taxation and controlling the banks but they needed to be up-front at the start of the interview before Naughtie led you into his mire.

Trident - the only party in Britain that won't replace it. That should be the message. Vince said it in the Chancellor's debate, Sarah Teather said it on Question Time. Naughtie led you into the smoke and mirrors of Ming's review of options and the message was the Liberal Democrats haven't made up their minds yet, the same message as Ming's policy three years ago. I warned then and I repeat now - you can't say to the voters, "We'll let you know our policy after the election".

Broadly, our policies are right and radical, but they won't sound it if we sound uncertain.

Nick, I beg you, let's have a lot more emphasis on the radicalism and a little less on the responsibility.
Posted by David at 9:16 am

Yeah, I thought that too. Nuaghtie was as rude as ever but I felt Clegg withered.

As a traditional Labour voter (with storng Lib Dem and Green sympathies) I am desperate to the Lib Dems to step up to the plate...I know 90% of their problems are to do with the media's obsession with controlling the agenda but we need better performances for Nick if we are going to get a true three horse race.