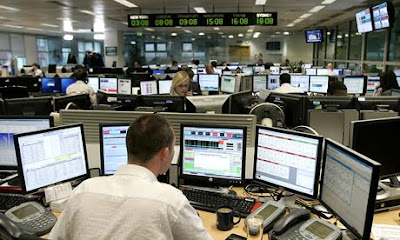 The Guardian reports, "Germany bans naked short-selling". Years ago I asked fellow Liberal and a stockbroker, Chris Wilding, what a financial headline meant. He responded, "Oh that means you're going uncovered bears". I was suitably enlightened. Now uncovered has become naked. It's selling stocks you don't own. If you sold someone a car you didn't own, you'd be guilty of an offence under the Theft Act for "dishonestly appropriating property belonging to another" and it would be no excuse that you planned to buy it before you handed it over. But of course the financial markets are a law unto themselves. High time they weren't. Good on the Germans, I say.
Posted by David at 10:08 am

So you think it should be an offence for someone to sell you a car they dont own, even if they have every intention of buying that car in good time to deliver it to you, and every ability to do so?

Also, would that really be a criminal offence? I cant imagine anyone going down for it. Not if they came through with the car in a timely manner.

Seems like a bit of an unnecessary law to me. I thought liberalism was all about getting rid of rules, not imposing ones with very questionable merit.,

It's not what I think. It's what the Theft Act says.

Ill take your word for it that the act says it, I was asking if you think it should be an offence. Do you agree with the law?

I assume you do, given your "Good on Germany" comment at the end. Presumably you think both the analogy and the more recent development are justified.

I would think it was justified if it could be shown to be useful. I am not here to demand protection of the financial services industry. But numerous studies of short selling restrictions have shown they are pretty bad at protecting markets. Short selling bans did almost nothing to protect financial stocks when Lehman went bust. In fact, evidence suggests the contraty: short selling bans make markets less liquid and exacerbate volatility.

In my opinion, this is a case of politics being put above good sense. Plain old banker bashing for its own sake - or to quench the anger of voters.

I confess to being no expert on the financial markets. It does seem to me that selling stocks you don't own in order to push the price down is basically immoral and has nothing to do with the real value of the underlying assets. Real people suffer because of this kind of gambling.

This is the confusion David. They do not (typically) sell stocks "in order to push the price down". They sell stocks because they believe the stocks are overvalued. (If they are shown to be trying to push the price of the stocks down, for example by orchestrating attacks with other investors or spreading rumour, then they are crossing a line and regulators will be coming after them.)

Im sorry if I am defending short sellers a little zealously here and I appreciate where you are coming from in terms of your feeling of unfairness. But I think the confusion displayed in this original post is symptomatic of broader confusions about financial markets - confusion that I think is leading us down a dangerous road. Politicians that either dont really understand the markets or are too worried about the votes of people like you (with respect) who dont are doing things that are not going to help and could do a lot of harm. The law of unintended consequences is bad enough when you tackle these things delicately. If you act unilaterally and without thinking carefully about what you are doing, things will be many times worse.

I completely sympathise with the outrage you feel feel about what has happened in the economy because of them (and that accusation IS justified - not to be made about hedge funds specifically but the finance industry generally). I am not saying we should do nothing. Only that a bad law is worse than no law at all. Politicians need to acknowledge public anger about banks and hedge funds (and inequality and other issues that arise out of it) but be very clear about what they do and understand what they are going to achieve and the price they will pay for it. That is patently not the case here.

I think the Druid and the Guardian ( http://www.guardian.co.uk/commentisfree/2010/may/21/angela-merkel-naked-short-selling-ban ) between them have persuaded me that banning naked short-selling may not be the solution.