How many will be excluded from our conference ? 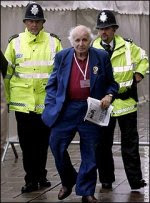 I asked Andrew Wiseman, Chair of the Liberal Democrat Conference Committee about exclusion of representatives from conference.He replied that "Conference Standing Orders allow us to exclude someone from conference. It is not something we would do lightly. As I have said given that the threshold of likely to cause a serious risk of harm to those attending conference or conference it is highly unlikely that any legitimate conference rep would be excluded."(My emphasis).

There are a number of problems with this reply. Firstly, Standing Orders do NOT empower anyone to exclude anyone. They only provide for an appeal from exclusion by the Chief Steward, a power which they do not confer on him. If he does exclude anyone, it can only be under Public Order legislation for behaviour during the conference, not because of some advance vetting procedure. Secondly, Andrew only says that it's highly unlikely that a "legitimate" rep would be excluded. Who decides who's legitimate ? Why should a legitimate rep be excluded at all ?

Zoe O'Connell asked Greater Manchester Police how many were excluded from last year's Labour Party Conference. Here's the answer: 11,988 people were vetted for the Labour Party Autumn Conference in 2010, 24 failed. (0.2%). Of course, the Labour Party wasn't even in power then, but we all know how much safer Jack Straw feels if anyone who shouts "rubbish" at him can be excluded using anti-terrorist legislation, don't we ?

I give the last word to the wonderful Dilly Keane and Fascinating Aida. I don't think the rozzers would let her in.
Posted by David at 4:53 pm

I think anybody who is a member of the Liberal Democrats should be allowed to attend the conference. I don't think it is fair for a party to let somebody continue being a member while not letting them attend major party events.