Not despairing, not deluded but deliberate 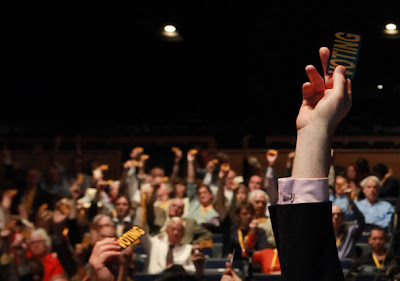 As usual I have been to a different party conference from the one the media floated through or above. The Guardian led the pack who expected Liberal Democrats to be downhearted and when we weren't decided that instead we must be deluded. Setting aside the joy of meeting old friends, the curious pleasures of debating and voting, we had other reasons for not despairing. There is the Tim Farron joke that we could cope with being out of power for a generation as predicted by the governor of the Bank of England, because we are used to being out of power for three generations. There is the comfort of Harold Wilson's observation that "A week is a long time in politics" and there is the gut wisdom of Harry Truman's "If you can't stand the heat, get out of the kitchen."

At the Guardian lunch, Paddy Ashdown chose a metaphor from military history. He recalled the Duke of Wellington saying to his troops when the French found their range, "Hard pounding gentlemen." Actually I don't think the Labour opposition has found our range yet, just scored a few lucky hits on our exposed left flank. I did ask Paddy, "Where's Blucher, where are the Prussians ?". He suggested that the voters would be the Prussians. I believe this can only come true if we establish clear gold water (not, please, aquamarine). As I repeatedly suggested at conference, the next election will turn upon how many voters have jobs. Myriad Liberal Democrat policies will weigh as nothing if unemployment is high. We need to propose a programme for jobs like Obama. We too may be blocked by conservatives but people will know what we stand for.
Posted by David at 1:45 pm