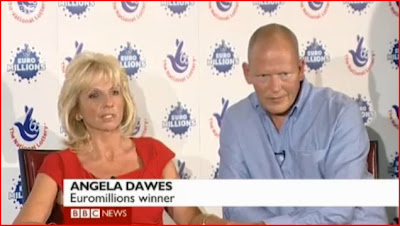 Lottery winner Angela Dawes said she and her husband woke up as ordinary people in the morning and now have over £100 million, adding, "It's mad". She's right. Millions of people bet money on the lottery every week (not the Daweses - they tried only three times) with astronomical odds against winning. Ask the same people to vote for a government that wants them to pay one penny more in tax to be spent according to a democratic collective decision and they vote against it. So people would rather part with a pound or more every week with an infinitesimal chance of personal benefit knowing that the biggest beneficiary (apart from the shareholders in Camelot) will profit not from hard work or talent but sheer blind luck. Mad indeed. The lottery is an investment in stupidity and a tax on hope.
Posted by David at 10:34 pm

Your words give it away "people would rather .."

But as a true liberal, surely you must support their right to make that choice - however stupidyou think it is!

Liberalism isn't morally neutral. It's actually a rather difficult stand to take. (Can't find my exact reply to Peter on Facebook but it went something like this)Liberalism is concerned with the development of individualism not its indulgence. There is no right to be stupid enshrined in any convention of human rights. Of course people can make stupid choices. John Stuart Mill said that whilst not all Conservatives are stupid, all stupid people are Conservatives (this was before the option of voting Labour was available. I don't want to abolish the lottery but I do want politicians to stop being afraid to make the case for taxation.