That's another fine mess you've got us into ! 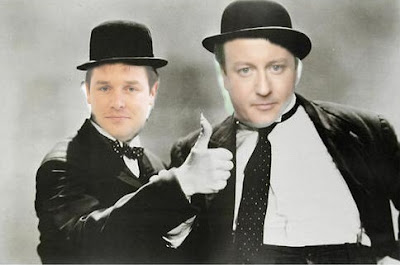 A lot of nonsense has been promulgated by Tory eurosceptics and even by Liberal Democrat apologists for the mess our coalition government has landed us all in. They have tried several arguments which don't work. As usual, the mantra - "Blame the French!" plays well with the public. Let's look at them in turn.

1. The government was protecting the City of London, the financial sector.
This is true but only if they were protecting them from proper scrutiny and regulation. See response by Edward McMillan-Scott, former Conservative and now Liberal Democrat MEP. Here's a flavour: "Cameron said the sticking point was the interests of the London financial sector, which has ripped off British taxpayers and stripped savers of their assets. What sharp City practices was Cameron trying to shield from the proper scrutiny which financial services in Frankfurt or Paris were prepared to yield to? Paying lip service to Europe's single market - which is of such value to the rest of the real British economy - while making bumps in the level playing field is simply ridiculous."

2. The government was proposing reasonable measures to preserve the Single Market !
Preposterous ! The UK put forward a a whole draft protocol to the Council legal service the day before the meeting, detailing various subjects in the field of financial affairs where they wished decision-taking to switch from Qualified Majority Voting to unanimity (some in areas that have been QMV from the beginning, and some that have been QMV since the 1986 Single European Act negotiated by Thatcher). This does not fit any definition of "perfectly reasonable" as claimed by Nick Clegg, Graham Watson and Sarah Ludford. Nor does it amount to protecting the single market since the purpose of a veto would be to block single market measures leaving each member-state to decide for itself. In any case, whatever the merits of the UK proposals, you simply cannot expect 26 other countries to bow down and accept such a document at less than 24 hours notice. Summits are usually preceded by months of negotiations. Cameron refused to negotiate about the document with the consequences we all know now.

3. Sarkozy was being unreasonable
This suggests traditional francophobia but actually the real situation is "Fog in channel- continent cut off". It wasn't a French veto. It was 26 countries disagreeing with Britain ! Do people imagine that 25 Prime Ministers always dance to Sarkozy's tune ?

4. This will make it easier to regulate the banks.
This little gem is attributed to Vince Cable and has even been parroted by some of the bankers themselves. Anyone smell a rat here ? No actual argument has been put forward and I cannot imagine how it could be true. Successful financial regulation has been resisted (by this government amongst others) on the grounds that it won't work in one country alone. To claim that European disunity will make it easier would seem illogical, Captain.

Nothing in the coalition agreement required Liberal Democrats to abandon our principles so dramatically. Nick Clegg is now trying to row back following reaction within the party. He should have got it right first time.
Posted by David at 6:21 pm

Point four is actually correct. One of the major problems with the Compact was that it would have made the requirement for higher capital reserves (as recommended in the Vickers report) virtually impossible to implement.

As for point 3, I'm inclined to say there's a lot more substance to this than you're willing to admit, and it's not just hysterical francophobia. Sarkozy has been ramping up the aggro every bit as much as Cameron in recent months, and there were actually indications that the Germans were prepared to consider the demands, but Sarkozy just told the UK delegation that they were making no concessions and would go forward regardless of whether they were with him. The rest of the Eurozone followed Sarkozy because not doing so effectively meant game-over for the currency into which they are locked. Even the non-Eurozone members who supported have voiced reservations, their support is subject to national parliamentary reference and in any case, most of the proposed guarantees the UK was seeking related to aspects of financial regulatory decision-making that frankly would hardly affect (for example) Denmark et al, who simply don't have global financial sectors about which to speak.

As for the protection of the single-market, the insistence that the EBA remain outside of the Eurozone was geared with precisely this in mind. The last thing you want is a regulatory oversight body acting from deep within. Further, the changes from QMV to the need for unanimity were not *that* unreasonable given that, frankly, the game has changed. We are going to have a highly concentrated fiscal union. That brings with it economic controls that absolutely need to be overseen and authorised by all member-states, rather than having the Germans and the French hold all the cards and make everyone follow.

As for the first point, I simply respond with this. The UK financial services industry accounts for 75% of the EU total. French and German financial sectors are quite simply small beer. People would surely be far more angry if, having seen taxpayers' money ploughed into UK banks, the UK government then allowed the EU to regulate the financial sector into such submission that it couldn't function sufficiently effectively to become sustainable and fully-functioning again. Anyone who thinks the Eurozone talks are about anything other than bailing out French and German investment banks, who made the mistake of lending to southern European governments to the tune of hundreds of millions of Euros really has no business then turning to accuse Cameron of isolationist self-interest.

Thanks for actually explaining the thinking behind point 4. I don't know whether it's right but at least it IS an argument and not just an assertion.

As for Sarkozy I am fully prepared to believe what you say as I have negotiated with some French politicians and officials myself and there is a streak of arrogance in that class of Frenchmen. However, I did negotiate successfully with them, because I took the trouble to understand and engage with their interests. Cameron has shown no skill at negotiating and tabling proposals so late was provocative and courting rejection. I shall think about the rest of your points but I suspect we will agree to differ.

Graeme, you may be interested in Sharon Bowles' comments which also deal with the capital reserves point. She is in a position to know. They can be read here: http://www.grahambishop.com/StaticPage.aspx?SAID=275

"In any case, whatever the merits of the UK proposals, you simply cannot expect 26 other countries to bow down and accept such a document at less than 24 hours notice. Summits are usually preceded by months of negotiations."

Then how was it acceptable for Sarkozy and Merkel to put this whole plan before the summit, on just a few days notice after they hatched it all up in Paris last week?

Thanks for replying David.

There's certainly other ways Cameron could have gone about some of these issues. The UK is already in rather protracted court proceedings in relation to the use of EU bodies (like the CJEU, for instance) by "treaty within a treaty" units. The capital reserves point is certainly related to that (albeit as a bit of a corollary from it) and if he were more savvy I suspect that he'd have got the Germans on-side for concessions of that nature well in advance of the summit. If there's real criticism to be had here, it was his decision several years ago now to pull the Tories out of the main centre-right grouping, because it's made lobbying a lot more difficult. I read that Clegg had gone on a diplomatic trip to Spain a few days ago to try to drum up support from the leaders there, but in terms of the summit itself, I'm not sure there was an awful lot more Cameron could have done but walk away.

I suspect Sarkozy was being particularly difficult to deal with because he's got an election coming up. Nothing like a few cheap wins over the Anglo-Saxons without any lasting damage from his perspective to boost his poll ratings....