BBC: Not very appealing, not much trust 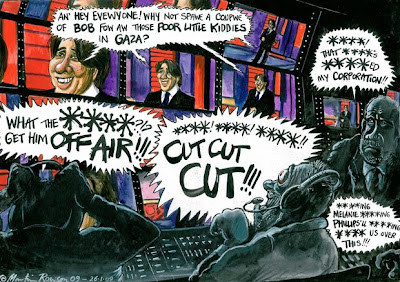 (Thanks to the Grauniad for the cartoon).
I have been pursuing the BBC's arcane complaints procedure to express my disgust at their refusal to broadcast the DEC appeal for Gaza. First, I received a response that simply re-iterated their original statement without answering my points. I replied to this as required and after two weeks received a response to my response to their response to my original complaint. This told me off for not using their webform and said that as the Director-General had made the decision, they couldn't consider any further complaint but I could complain to the BBC Trust.

As I had read their detailed procedure, I wasn't entitled to appeal to the trust until I had exhausted the BBC's own internal procedure. Meanwhile others had complained straight to the trust. Despite the fact that the trust had already received an appeal and reached a decision, the BBC's letter to me made no reference to it.

Turning to the substance of the trust's decision, they have acted like a court hearing a judicial review or an ombudsman receiving a complaint. In each case, the reviewing body (trust, court, ombudsman) does not attempt to substitute its own judgement of the issue for the judgement of the initial body (BBC in this case) but only to review whether the initial body arrived at its decision in a proper way. This is usually expressed as they took into account all relevant arguments, did not take into account any irrelevant arguments and their decision was not so unreasonable that no reasonable body could have taken it. In other words, there is no appeal on the substance rather than the process. As long as he jumps through the right procedural hoops, the BBC Director-General is no longer under anyone's control as he was when there was a Board of Governors. Isn't it comforting to know that the trust claims "As representatives of the licence fee payers, we take complaints about the BBC very seriously" ? Like so many of New Labour's reforms, the replacement of the governors by the trust has weakened the voice of the citizen.
Posted by David at 11:08 am