I disapprove of what you say... 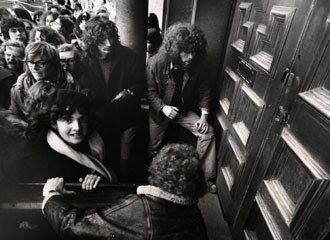 Oh dear, oh dear ! The Today programme could not find a minister to defend the government's stupid decision to ban Geert Wilders from entering Britain, so they found Chris Huhne to do it for them. Chris began by saying "Freedom of speech is absolutely crucial" and then showed that he doesn't know the meaning of absolute by trying to draw a dividing line we should not cross, a principle for exceptions to freedom of speech. First he argued we should not allow "incitement to hatred or incitement to violence". John Humphries pointed out that these are two different things. Chris tried again. We shouldn't allow speech which is "creating the conditions for violence". We should have "freedom up to the point where there is potential for harm". Talk about stop digging when you're in a hole. Chris had not thought through the principles he was trying to enunciate. Freedom of speech is not absolute but it is bloody important.

The home secretary has the power to stop people entering the UK if she believes there is a threat to national security, public order or the safety of UK citizens, but she cannot exclude people simply because of their views. Wilders says the government's reason for not allowing him to enter is because his opinions "threaten community security and therefore public security" . The Home Office website gives no information on the point. No minister appeared on the Today programme.

Chris is wrong and Jacqui Smith is wrong, wrong in principle and wrong in practice. They are wrong in principle because what they object to is Wilders' opinions (and they are objectionable) but his views do no not themselves incite violence, they upset and offend many people, some of whom may become violent in reaction. His film if anything condemns violence. The film combines extracts from the Koran which encourage violence with clips of actual violence by Islamists (NB. This is the general term not for Muslims but for what the press calls Islamic extremists). I'm sure a similar film could be made with extracts from the Bible and clips of Christian violence or from the Torah with Jewish violence. The offence lies in not distinguishing between Muslims and Islamists. Wilders may be ghastly and his views dreadful but we should not prevent the expression of views which create "the conditions for violence" or "where there is the potential for harm". A literal interpretation of these tests would prevent the expression of any opinion which could possibly upset or offend anyone prepared to resort to violence when upset or offended. Nor should we allow the Home Secretary or even a judge to decide on a non-literal interpretation. The link between such words and actual violence is not sufficiently proximate. Offending the violent is NOT inciting violence. If you think it is, you are handing over power to the bigot.

They are wrong in practice. Jacqui Smith's decision (which she would not defend in public but Chris did) has given more publicity and support to the wretched Wilders that letting him in to the UK would ever have done. Polls on the Daily Mail and Guardian websites both show an overwhelming majority of voters opposing the ban. Newly elected Presidents of the Liberal Party and the Liberal Democrats traditionally receive a copy of the Milton's Areopagitica which contains the phrase,
"...who ever knew Truth put to the worse in a free and open encounter ?". I commend it to Chris. The right response to Wilders and anyone like him is to hear them, to argue with them and show that they are wrong.

There is another worrying implication here. Wilders is a European citizen and parliamentarian. He was invited by a European citizen (Lord Pearson of UKIP may not like this description) and parliamentarian. Wilders' attendance at the meeting in the House of Lords was prevented by Jacqui Smith, a member of the Executive. The prevention of discussion among parliamentarians by the Executive is characteristic of fascist government. Of course I do not say that our government is fascist but they do need to consider more carefully the implication of their decisions.

Finally, on the subject of offending people, have a listen to Marcus Brigstocke on religion on YouTube. Perhaps Jacqui Smith will prosecute him.

I thought Areopagitica was replaced by On Liberty when the LibDems was formed.

I'd say freedom of speech is absolute, you cannot draw arbitrary lines.

'Incitement to hatred' is definitely covered by free speech, and I'd argue that incitement to violence is covered - the crime is the violence not suggesting it - you cannot be held responsible for the actions of freely acting individuals.

I don't believe freedom is speech is absolute but that it has a very high priority amongst civil rights. Common Law has always punished speech which leads directly to violence,.e.g."Shoot the bastard!" but required a close connection between the speech and the act. Saying, "I think all estate agents should be shot" is not illegal. The tests that Chris proposed were vague and not justiciable (I think that's a word).