Elementary, my dear OR Is it possible that I agree with the Daily Mail ? 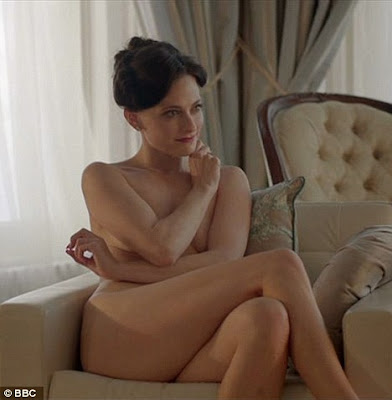 Watching the first episode of the new series of Sherlock on New year's Day I did note with surprise that we saw a nude dominatrix before the watershed of 9 pm. The excitement has proved too much for the Daily Mail whose classic prudery was displayed in an article attacking the BBC accompanied by pictures of the nude Ms Pulver (see above) playing Irene Adler. Strangely the series co-creator Steven Moffat's defence was that he had given Holmes an overtly heterosexual sparring partner to scotch speculation about a homosexual undercurrent to the relationship between him and Dr John Watson. This reminded me of the 1970 film The Private Life of Sherlock Holmes in which Holmes defended his virtue against a passionate ballerina by suggesting that Dr Watson was his cup of tea. Wouldn't Conan Doyle have been surprised ? But I digress.