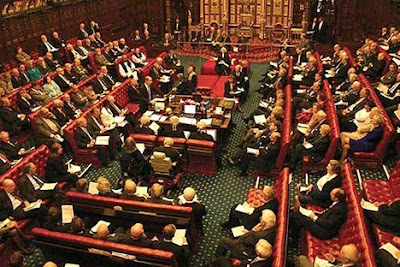 The great work of reforming the House of Lords, started by the last Liberal government in 1911,grinds slowly onwards. Paul Tyler, a member of the Joint Committee on Lords Reform, has posted telling arguments for more than 300 senators today. He also raise the question of the role of the reformed chamber. Here's a suggestion.

Some years ago one of the think tanks, DEMOS I believe, suggested a pre-legislative scrutiny stage for all bills using select committees and taking evidence from the public. One of the reasons for this was to ensure that everyone would have a chance to influence legislation and not just professional lobbyists hired by vested interests. I can imagine that governments would not generally welcome delay in processing bills and I don't expect the Commons to adopt such a plan any time soon. However, I note that David Cameron has called for less but better legislation. Perhaps a reformed House of Lords could provide the ideal forum for such pre-legislative scrutiny.
Posted by David at 11:00 am

Email ThisBlogThis!Share to TwitterShare to FacebookShare to Pinterest
Labels: DEMOS, House of Lords