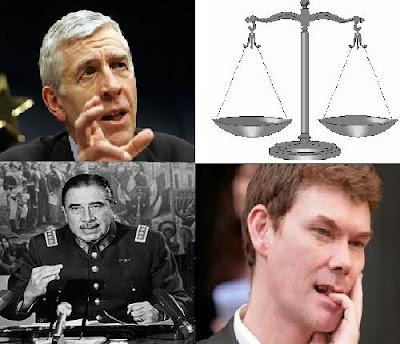 As Home Secretary Jack Straw evaded his legal obligation to extradite murderer and torturer Pinochet by saying that he was unfit to face trial. Pinochet returned home to greet his supporters showing no signs of unfitness. Even tea with Margaret Thatcher hadn't made him sick.

Perhaps as Minister of Justice, Straw might see the case for refusing to extradite Gary McKinnon as unfit to face trial, or does that get-out-of-jail free card only apply to corrupt dictators and not to UFO-geeks with aspergers. I don't suppose Straw will stop the extradition. Giving him the post of "Secretary of State for Justice" truly took New Labour into the realms of 1984.
Posted by David at 10:00 pm