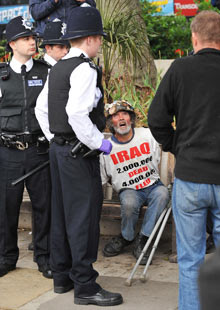 Yesterday the High Court granted the GLA an injunction to remove protesters from Parliament Square under the law of trespass. However, Boris may allow Brian Haw, the anti-Iraq War protester, to remain. He'll find it difficult to budge him.

In 2005 Charles Clarke, a veteran of NUS protests when he was Chairman but by then New Labour Home Secretary,put the Serious Organised Crime and Police Act through parliament which forbade protest near parliament without the permission of the Met, a provision specifically designed to remove Brian Haw. Ironically, when Haw was prosecuted, the court ruled that his protest predated the Act and therefore he is the one man who cannot be removed under the Act.

This time , Boris claimed the protesters presence in the square "prevented its peaceful use by other Londoners". Strange ! Last month, my sons and I had a perfectly peaceful picnic in the square along with many others. I introduced them to Brian Haw and congratulated him on his protest.

Tessa Jowell, as Culture Secretary, tried to stop the anti-Iraq War demonstration in 2003 from using Hyde Park, because it would damage the grass. Jowell and Clarke, of course, supported the illegal invasion of Iraq which, I imagine, rather prevented the peaceful use of Baghdad and the whole country and damaged more than the grass.
Posted by David at 10:09 am