The Iceman and the nations 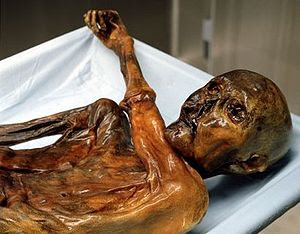 I went to see a man who lived 5,000 years ago today. I had heard of Otzi, the Iceman, whose mummy was discovered high in the Alps in 1991 but I didn't know he was in Bolzano. In his own way, he too has played a part in the rivalry of Austria and Italy in the Sud-Tirol / Alto Adige, although neither country existed when he lived. His body was flown to Innsbruck but the Italians claimed him and careful surveying revealed that his mountain grave was 101 yards inside the Italian border. It's a great museum.
Posted by David at 11:04 pm