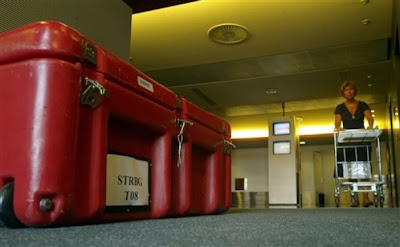 EUobserver.com reports that a collapsed ceiling in Strasbourg forced the European Parliament to stay in Brussels for a part-session and thereby saved €1.7 million. The Telegraph's Europhobe and MEP, Daniel Hannan, wants to have no parliament at all.. Last November Hannan actually blamed the EP for not voting to stop moving about. He knows this is disingenuous, in fact dishonest. They can't. The EP's locations are decided by agreement between governments. When polled, 89% of MEPs wanted the parliament to have a single seat.

Every summer during the silly season when there's no news, the Telegraph and other Europhobic organs run the story of the cost of the migratory European Parliament. ( Of course they don't like foreigners moving about.) What they never print is that it's their beloved national veto (in this case, exercised by France and Luxembourg) which prolongs the migration. If the EP had the power to decide its own location, it would have settled long ago but the Europhobes hate the EP having more power. Hannan hates its existence.

Cecilia Malmström MEP started a petition for a single seat which has over a million signatures. Sign here, Daniel Hannan and stop lying.
Posted by David at 9:35 am