Vince Cable and the end of innocence 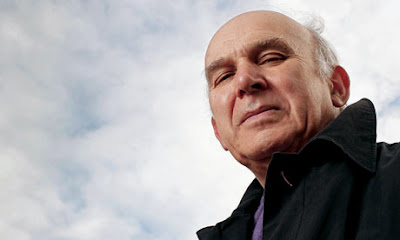 "As much as I ever did, more than I ever did, I believe in Liberalism. But there was a rosy time of innocence when I believed in Liberals." wrote G K Chesterton.

After Vince Cable today tried to threaten the trade unions with the possibility of tougher laws to prevent strikes, I recalled what Chesterton wrote. That's not why we wanted a Liberal government, Vince. Then I recalled, of course, Vince isn't a Liberal. He came to the Liberal Democrats from Labour via the Social Democrats. It's not Vince's first mistake in government. The mantle of wisdom which descended on Vince so quickly in opposition has blown away as quickly in office. I remember something else which Chesterton said:“When a politician is in opposition he is an expert on the means to some end; and when he is in office he is an expert on the obstacles to it.”
Posted by David at 10:17 pm

Didn't read to me like Vince was warning them off strikes per se, more off strikes that were motivated by political posturing ("bring down the coalition") rather than real injustices / other such problems.

Maybe I'm missing something but I fail to see anything unreasonable in what he said:

"Later this month, we may very well witness a day of industrial action across significant parts of the public sector. The usual suspects will call for general strikes and widespread disruption. This will excite the usual media comments about ‘a summer’ or ‘an autumn’ of discontent. And another group of usual suspects will exploit the situation to call for the tightening of strike law.

We are undoubtedly entering into a difficult period. Cool heads will be required all round. Despite occasional blips, I know that strike levels remain historically low, especially in the private sector. In fact, until March this year the number of days lost through strikes was lower than at any time since 1931. And of course the right to strike is a fundamental principle. On that basis, and assuming this pattern continues, the case for changing strike law is not a compelling one.

However, should the position change, and should strikes impose serious damage to our economic and social fabric, the pressure on us to act will ratchet up. That is something which both you, and certainly I, would wish to avoid."

@LibCync I agree that in cold print it looks reasonable. Spoken live by a minister of the crown at a trade union conference the message comes across as a warning. Either that's what he meant or he's more naive than I believe.