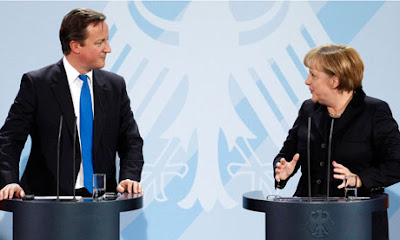 A "Merkel" is when you pretend to give up something in negotiation in return for what you want and thereby (a) get something for nothing and (b) save your opposite number's face.

Thus, Angela Merkel pretends that the UK can repatriate some powers (stupid idea anyway) in return for which Cameron agrees that EU can have tighter fiscal policy.

See also the "reverse Merkel" in which A pretends to accept something (which A was going to accept anyway but pretended to oppose)in return for B accepting something which they were really going to oppose.

Thus (domestic example) the first time I went food shopping with a new partner I pretended that we shouldn't spend money on pasta (or whatever) but gave way when she withdrew her opposition to my chocolate biscuits, which I had anticipated.
Posted by David at 11:22 pm

"stupid idea anyway" - SINCE WHEN IS DEMOCRACY A STUPID IDEA? Don't kid yourself that Cameron is Eurosceptic, he's not. When he has to take the hard decisions, he'll either blame the EU or LibDems but he's a Europhile through and through.

We want our country back. We want to run it they way we believe it should be run.

We are and always have been "global players", not little Europeans!

Sue, I do NOT say democracy is a stupid idea. I say that democracy cannot be confined to nation-states and that we need to build supranational democracy, of which the EU is the world's first example. The reason I say that repatriating powers is a stupid idea is that the reason we have agreed to share some but very few powers at European level is that individual member-states no longer have the capacity to use such powers effectively in a global economy. We could have the illusion of sovereignty as we try to deal with the economic power in the world but it would be the sovereignty of corks bobbing in the wake of an ocean liner.