"Conference maketh a ready man" (and a poorer one). 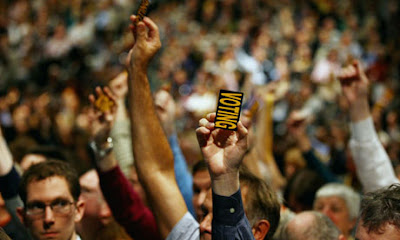 Given the prejudices of his era, Francis Bacon probably didn't mean women as well when he wrote that but I'm not aware that he had anything against young people, male or female. (Indeed his essay, "Of Youth and Age" finds good and bad in both.) Nevertheless that is the problem today. Young people, it seems, are less likely to confer. As Susan Gaszczak points out, 40% of Liberal Democrat conference representatives are 60+ and 70% 40+. Long gone are the days when, as in 1970, the Young Liberal Conference had more delegates than the party conference. I don't have figures for the Conservative and Labour conferences, but I suspect they are worse.

The causes are political and financial. Politics has always been a minority sport but today is of less interest to young people than in those halcyon days when I was young. Politicians either lack ideology or are scared to express it so that political debate has diminished to a bathetic "We can manage things better than them". The media avoids any clash of ideals that may by chance appear, preferring to harp on the personal and procedural trivia of who tweeted what and when, between sleeping with whom. Party managers strive to avoid conflict at conferences. Small wonder that neither politics nor political conferences attract the young.

If some ardent spirit overcomes the discouragement of modern political dialogue, he or she now faces the financial barrier. Attending a party conference is an expensive business involving conference fees, travel, accommodation and meals and not all drinks are to be had free at fringe events. I doubt that any local party considers paying expenses for its representatives, regarding the conference as a jolly, remote from the important daily business of winning council elections.

We can all improve the political dialogue and lift it above trivial personalia and technocratic policy wonkdom. The conference committee should turn its collective and extensive grey matter to the question of cost. Nor is it a problem only for the young. We don't want policy decided exclusively by the well-heeled.
Posted by David at 10:27 am

To be honest, the conference fees are pretty unimportant compared to the cost of travel and accommodation. Registering for conference this time round as a student cost me around £15. Travelling to Newcastle and back by train (with an advanced ticket at an awkward hour) cost about £55. I'm not paying for accommodation this time, but in Birmingham it cost me £50 for four nights in a ten-bed dorm in a hostel. Unless someone subsidises these sorts of costs, it's pretty difficult to persuade young people to come.