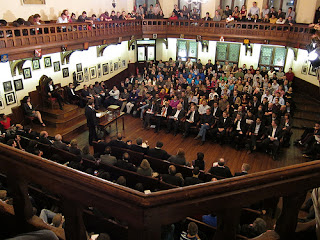 Walking around Venice in early 2011, I decided to move back to Cambridge.  Finally in the summer of 2012 I did it. From time to time, I'll be posting about what I found here

After a hard day's work at home in June, I received a message from the Cambridge Union: Presidential Debate tonight: "This house would disband the Liberal Democrats".  Well, I wasn't having that.   I turned up and sat on the committee bench where I had last sat in 1973.   (Prize if you can spot me) 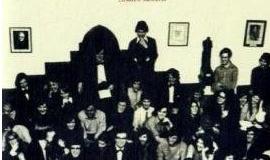 The polite young people ignored the strange old bugger who had wondered in.  They were busy holding hustings for various posts which either didn't exist when I was a student or, if they did, were not elected posts.   This went on for over an hour.  You can have too much democracy, you know.  What struck me was that none of the candidates gave the slightest clue of their politics.  They all talked about their experience and their plans for the Union.  One candidate was in China and appeared by Skype.  In 1973 runners with cleft sticks would have been the technology.

Finally, the actual presidential debate.  The first thing which anyone from my generation cannot fail to notice is the number of women in the chamber, a big change from the early '70s when there were only 3 women's colleges and no co-education.  The debate veered between two themes - the nature of the Liberal Democrats and the record of the coalition government.  The outgoing president attacked the latter and his supporter David Davies cleverly attacked the former - for not being Liberal enough.  Ed Davey unsurprisingly chose to defend the coalition record.  Lembit Opik said...well, who can ever remember what Lembit says, but it was a bravura performance and probably won the debate for us, defeating the outgoing president's motion.  Of course, it might have been my own short contribution in the floor debate when I read out the preamble inscribed on every party membership card:

"The Liberal Democrats exist to build and safeguard a fair, free and open society, in which we seek to balance the fundamental values of liberty, equality and community and in which no-one shall be enslaved by poverty, ignorance or conformity."

No other party will save you from conformity.

I really welcome two changes from the old days.   We used to have all the guest speakers first, then the floor debate during which most of the audience drifted off to the bar.   Now they have the floor debate before the final guest speaker. The committee used to entertain the guests in the Chief Clerk's room.   Now they are taken to the bar where everyone can meet them.  I have yet to sample some of the more contemporary innovations, such as the Union's classes in how to mix cocktails.  We didn't have that in the '70s.  I wonder if they did in the '20s and '30s.  Probably not.  You'd hire a chap to do that for you.
Posted by David at 11:24 am

David - interested in your motivations for returning to Cambridge, as I have done the same (with only slightly shorter gap - 1988 to 2011). Did you come to the CULC Centenary Dinner in 1985 - I was Chair then? We have come here for schools from SW London where primaries were fab and secondaries not. My eldest daughter is at Parkside now. Women were already at nearly all the colleges by the time I arrived and I'm sure the Union had Mario from the Maypole in for cocktail mixing! Other than that much is unchanged - Colin Rosenstiel is still a Councillor for one. I went to Cambridge LD AGM on Friday and your name was mentioned in dispatches btw.