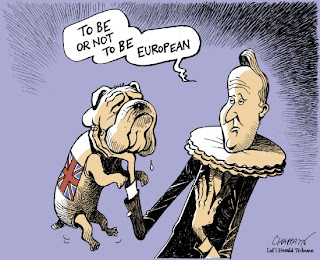 The nation waits, breath held, belts tight, ears cocked for the great leader's great speech on Europe. What will he say on Friday ?   Why will he say it in the Hague ?   Will it be perhaps in double Dutch ?

I see two certainties and one necessity.  1. There will be a referendum on British membership of the EU during the next parliament.  2. If there were a referendum today, the europhobes would win.   The necessity is to work hard to avoid the same result in 2016 or 2017.
Posted by David at 10:17 pm