Who shall we defenestrate now ? 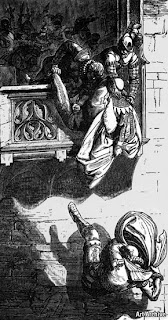 Fascinating Economist article comparing the European Union and the Holy Roman Empire, the current crisis in the EU and the decisive moment which is upon us with the Reichstag meeting in Regensburg in 1652.   Probably safe to assume that Van Rumpuy will not arrive accompanied by 60 musicians and three dwarves, unlike Ferdinand III, the Habsburg monarch of the Holy Roman Empire.    There is continuity even in that family.    I once had to lobby the German MEP Otto von Habsburg.    There is a well-known but apocryphal story that finding the European Parliament bar empty one day, he asked the barman where everyone was.   The barman replied that they were all watching the football.
"Who's playing ?", asked Otto.
"Austria, Hungary" said the barman.
"Against which country ?" asked Otto.

Interesting though the comparison between the EU and the HRE is, it neglects one vital feature.   Boris Johnson made the same mistake in his television programme some years ago comparing the Roman Empire favourably with the EU.   Yes, the difference is democracy.   The EU was established democratically by democracies and, for the most part, works democratically.   This leaves us with one question:

"Who shall we defenestrate today ?".   My choice is Nigel Farage.